I’ve been working with badges for over a year now, and we’re finally starting to put together a program that will help identify skills, have students award other students badges, and make up essentially a co-curricular record for students.

Internally we struggled (and still struggle) with the software and the design – early ones had easy to achieve badges which didn’t mean much; later iterating into something a bit more robust. I wanted to share what we’re doing but people are also looking at researching our efforts, so I’ve had to abstract that a little bit to share the design, but not the specifics. So I looked around and thought about the things I know that might be transferrable. At the same time D2L has announced that the Learning Environment for continuous delivery clients will get a badging application in the September update. Aha! The badges of D2L. It’s not a perfect analogy, but bear with me, I think there’s some important parallels that should be easy to decipher. First, some history.

Many people who have been through an LMS review will tell you that selecting the software  is not just about features, it’s more about the people behind the software. Much like badges, it’s not about the image that they project, but the metadata that they contain within. So for the purposes of “badging D2L” I’ve decided to take the well known public faces of D2L and apply badges to them. It works as a parallel for the work we’re doing around building a co-curricular record. 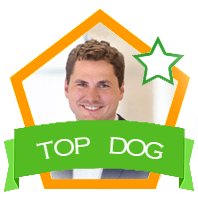 The top of the hierarchy is easy, it’s the Top Dog badge. This badge is awarded for people who are involved in a wide variety of things, evangelize the D2L experience, are endlessly positive and feel like a trusted companion or a good friend. Who would be the best person to represent the Top badge? Founder and CEO John Baker is clearly the most well-known of all D2L employees. Most customers, industry analysts (amazing that EdTech has analysts now), and will think of John Baker when thinking about D2L. Always interested in his clients, and endlessly positive about the D2L products – John fits the top of the hierarchy (and the characteristics of our badges).

Just underneath the Top Dog badge, we have three other that one has to earn, before getting the Top badge. The Community badge, Productivity badge and Development badge.

The community badge could be earned for contributing and developing a sense of community around D2L products.

After John Baker, Barry Dahl is in the #2 spot of people well known within D2L – that can 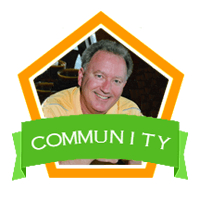 be within the EdTech community (via the Desire2Blog he authored prior to joining D2L), or the Teaching and Learning community (via the D2L Brightspace Community, or the many regional forums that D2L hosts around North America). He has been a D2L award winner multiple times (prior to going to work for them, of course), been on the main stage at Fusion multiple times, probably upwards of a hundred webinars and is just generally well-known throughout the D2L customer base. In fact, I’d say that if you became a client of D2L in the last 5 or 6 years you’d be very likely to know Barry, much like how I got to know Barry, through the community around D2L’s products. Never mind the fact that Barry was a “face” of D2L before being hired by D2L. He was critical of the product at times, but always out there helping the community around the D2L Learning Environment.

For the Productivity badge, the earner has to be able to be a part of different aspects of a project, responding to other member’s (and community) ideas in an inclusive, respectful and productive manner. 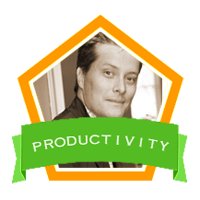 The Productivity bages is represented by Ken Chapman. Ken as VP of Market Strategy is certainly one of the more prominent D2L people due to his longevity with the company and  his engagement in many different forums; including Fusion, webinars, client visits, and  the like. Funny, I went to D2L’s site to grab a picture of Ken for the badge, but he’s not listed under the  “Leadership” page on their website.

The last badge at the first tier would be the Development badge. This badge would be earned by demonstrating the development of themselves, the community and/or project. 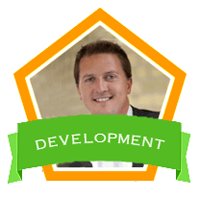 The Development badge is represented by Jeremy Auger, Chief Strategy Officer at D2L. Another long-term employee (one of the originals, I think) who has had pretty high visibility at Fusion and in all the other venues  where  you  have a chance to get to know these people. One caveat here  is that lots of D2L customers know who Jeremy is, but I’m betting that very few can actually tell you what he does (I’m sure it’s something…). The badge is sufficiently vague, like a title that is bestowed on a chief strategy officer. I kid, I kid, cleary D2L’s strategic efforts in their three markets (K-12, Higher Ed, Corporate) must pass through Jeremy.

As you might well know, badges can be cumulative or solitary. I’d imagine that would be the case if I were explaining D2L’s badging hierarchy, and not McMaster’s approach to badging co-curricular activities. So the next level below might be made up of two or more badges that could earn you the Community, Productivity and Development badges. If we were to further drill down D2L’s hierarchy, lesser badges might be represented by some other well known D2L people.

For the Development side of things: Probably Nick Oddson, Sr. VP of Product Development.  Nick hasn’t been at D2L all that long, but he has had high profile announcements at the past couple of Fusion conferences. If he sticks around, he will more and more become one of the faces of D2L. Another person might be Paul Janzen, who’s very active in the Valence community and on the development side of things.

For the Productivity side of things: Mike Moore another employee who came out of education and who gets lots of face time related to the Insights analytics product line and learning outcomes (which are currently undergoing a revamp).

For the Community side of things: Maybe controversial (depending on when you became a D2L client, you might look for Jason Santos here, but in my opinion he’s too new), but I’d choose Terri-Lynn Brown for this spot since it is based on who the best-known employees are, not the most “important” (whatever that means). Terri-Lynn is a Calgary resident and a former K-12 educator who still is very well known within that market, and across Canada.

After that, we could go on with this exercise, but I think you get the idea. If I had made this post a few years ago, it would be a radically different post – filled with names that resonated maybe a little more. I wonder if the changes we’ve felt as clients of D2L will spill forward into the product.

This site uses Akismet to reduce spam. Learn how your comment data is processed.

@iancborsuk Historically, Hamilton has always been a magnet for far-right groups. It's not the cars, but the whiteness of the city up until the 80's. The rough around the edges identity that was wrapped up in lunchbuckets and steel mills didn't help.

@coolfacejane Deplatforming is a two-pronged though - a containment strategy (keeping the damage to a smaller group) and reduces the income from grifting that they can avail themselves of. A more effective strategy would be to start auditing the "businesses" that prop up the grifts...

Maybe I'm just dense, but I fail to see every single time, how a CRM can be student-centered. It's always institution (bank, insurance, company, school) centered. It's to gather information about the person and display it to the institution!

@holden What is wrong with him?

@LibSkrat They'll be fine, unfortunately. They get more from Rogan than most of their music agreements.

@tjoosten Please, no more discord. It's become worse than slack was 5 years ago.

@PuljujarviA @ntrider825 @JFreshHockey I don't think he'll go there, but not because of the location. Buffalo mismanagement is similar to Edmonton's. If he's moving, I can see Carolina as a possible fit, or LA, if they can move Quick and some other salary.

@PuljujarviA @ntrider825 @JFreshHockey Played in Erie as a junior, and liked the region.