I’m sure i>Clicker won’t be particularly happy with this post, that’s ok, because I’m not happy with them. The one thing as an LMS administrator that you should feel very, very sanctimonious about is sharing data. We have an internal policy that we’ll never share student numbers. I also think that we shouldn’t share usernames, however some folks feel that’s ok. I guess it depends on your username convention. First dot last as a convention is great, except in these cases when you’re trying to maintain privacy. Now, if you’re making a single sign on connection through LTI, you can have the originating LMS username obfuscated, which essentially boils down to a paired database table that has two usernames in it – the one handed off to the third party via LTI, and the one in the LMS. Typically, I’m a little bristly about this as well, because you become reliant on the system not changing how this is handled, and if there’s an HTTP call mixed in there, it still could be sniffed out while in transit… but that’s not what this post is about.

Since last year, I’ve been bugged by i>Clicker to do an integration to make sign-up with their service seamless for students. There has been some requests for integration between i>Clicker and the gradebook in D2L from some of the more heavy users. The first request, I’ve always put off because, frankly, I don’t do anything a private enterprise wants me to do, they aren’t my boss, nor are they a member of my community. They serve one purpose, and that’s collecting money. The second, however, does benefit a select user group on campus. We were thinking about this since last year’s summer of integration, and April had a couple minutes free (more on that in forthcoming blog posts), so we scheduled some time to finally make it happen.

We schedule a call, to walk us through the integration and see if there’s anything that we have questions about. I don’t need anyone to walk me through an integration, but I often like to raise privacy, data collection policies, and other awkward questions to the poor sucker who’s on the end of the other line. Typically they are ill informed. I didn’t even get to the awkward stage, as a request was made that was frankly shocking. I was asked to turn on passing the Org Defined ID – or our student number – to facilitate the connection. Not just at the tool level, but at the configuration for the Tool Information. See below: 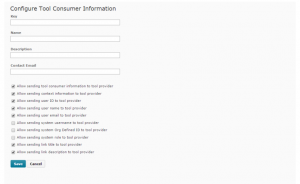 Now if I understand this panel correctly, it not only changes the configuration settings for the tool in question, but for all the tools. ALL the tools. So not only i>Clicker, but anything else you have connected through using the External Learning Tools administration panel. I asked our technical account manager about changing it, and he basically said, “yeah, that’s not good.”

So in the middle of this exchange where I explain how we don’t pass the student number under any circumstances, the i>Clicker representative seemed to be a little miffed about my protests. He wasn’t particularly nasty about it, but certainly didn’t seem to understand why this was an issue at all. Looking at i>Clicker’s website, students are asked for their ID. It’s different asking a student to give them their ID (consent) and setting up access to everyone’s ID (no consent).

What makes me wonder is, how many other institutions even give this a thought? Surely we can’t be the first person to balk at the idea of handing over student data like this? Or maybe we are being too paranoid? I mean, I guess there’s people who have faith in the third-party vendors, but I’d prefer having a license, stating exactly what they are doing with data, how they’re using it, how long it’s retained and an agreement signed between the two parties. That way if the external party violates the agreement, the institution can hold them liable for the data breech – something a little stiffer than “oops”.

We’re in the midst of developing an LMS survey – which has broader implications as we also want to ask about other services my department provides (which is Blackboard Collaborate for web conferencing and iClickers for classroom response). All of a sudden, this quick survey has turned into this potentially really long thing that people will be unlikely to answer. Never mind it’s late in the semester (exams started yesterday) so I expect that user responses will be less than stellar.

With that said, it will be interesting to see what people think of D2L as we’ve introduced it. In the three years I’ve been here we’ve made some significant upgrades (from 9.2 to 10 in one year, and to 10.2 the next) and with those upgrades have come some significant growing pains. Next year should see us integrate Blackboard Collaborate, Pearson and McGraw Hill into our instance of D2L, which will hopefully solve some issues for faculty (namely the butt ugly interface you have to use with Blackboard Collaborate). We’re also planning on fixing the partial e-mail issue and additionally have PeopleSoft integrated into our process as the old Student Information System is going to get shut off. Cripes, that looks like a lot of change on paper – and I’m not quite sure how things will get managed. So yeah, if I’m not blogging that may be why (never mind the two presentations I’m co-presenting at Fusion, or the one I’m doing at AAEEBL!). Busy, busy summer.

Well, what does that mean for you, good reader? Well, probably more of the same – sporadic updates, maybe some neat charts and graphs,  some preliminary findings from our Learning Portfolio initiative in year one and more snarky comments about what MOOCs have become.

@JFreshHockey Wait til someone comes up with some "great" penalties/60 and calls it the grit factor or something. We'll be yearning for offside discussions.

@ClareSealy @bjaerosmith @C_Hendrick My answer for this is don't assess the end product (essay) assess the process - first drafts, annotated bibliographies, feedback and improvements. It changes the way you assess, but let students use AI for generating the essay proposal. Feedback shifts it to their voice.

@krussellphd1 @ReninaWrites They also make things clear, and make expectations explicit. If your assignments do that, then you probably don't need one. Creativity can be accounted for with rubrics. Where rubrics often fail is the components of "meeting a standard" that is often based on white standards.

@jasonlamb I hope that's part of your feedback, hahaha

@jasonlamb You were paid to test it, not to act as QA.

@joedale @mansiontwit I have one, and it's stellar. The price is worth it.

@jasonlamb I think they were banking on a breakout season. Montreal dodged a bullet there.

@PazzoArrabbiata @sirmastrjamie Try one of the many unions in the media industry.

@burritosesh @trustablegenius It's the sort of thing important to the local scene, but I don't think it'll resonate on a global level. Youth Youth Youth and Direct Action are the two best TOHC from the 80's.